Click here to play video
FRANCIS DUMAURIER IN MAINLAND CHINA
Francis Dumaurier played the co-starring role of General George C. Marshall in 21 episodes of a “A War Of China’s Fate”, a mini-series produced and aired daily by China Central Television for CCTV’s hundreds of millions viewers nationwide in celebration of the 50th Anniversary of their revolution.
Francis spent 3 months in 15 locations of several regions of mainland China for the digital videotaping of authentic historic re-creations which were all shot in the very places where the events actually took place.
This was the first time that CCTV hired American actors and, following an audition held in New York City, Francis booked one of the four lead parts of the entire series, the part of General George C. Marshall, which turned out to be also the most important American role.
This made-for-television epic was a real adventurous first time experience for the Chinese and American cast and crew, a constant cultural wonder, and a bilingual challenge.
The 4 photographs above show Francis as General Marshall, with Zhou Enlai of the Chinese Communist Party, with Chiang Kaishek of the Nationalist-Kuomintang, and Chairman Mao Zedong with his wife Jiang Qing. 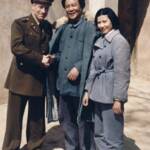